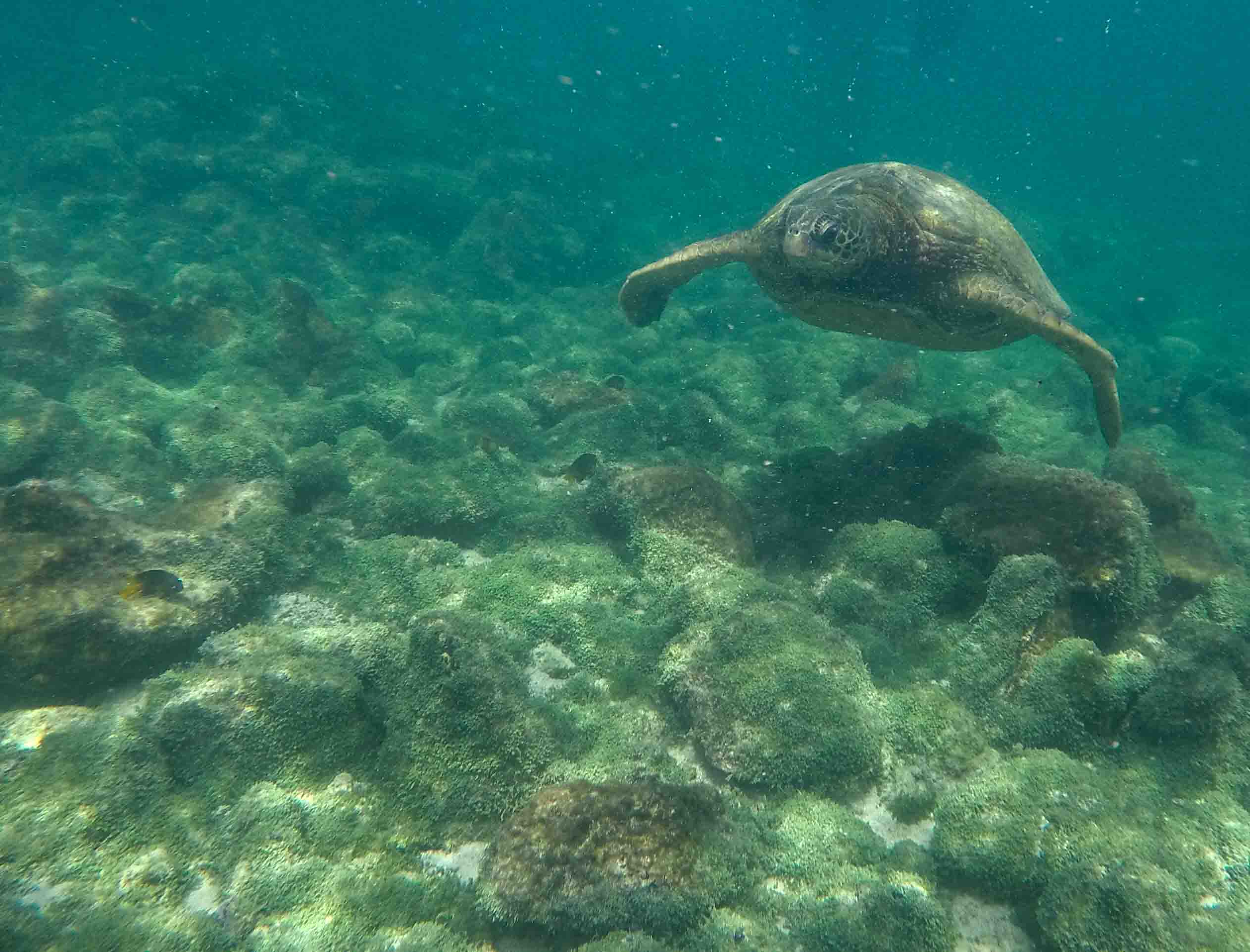 AM.: Airport, travelers pass through an airport inspection point to make sure that no foreign plants or animals are introduced to the islands, as well as to pay the park entrance fee ($100), Our guide will meet with you, will help you pick up your luggage, and accompany you to the port of Puerto Ayora in a taxi ride, where we set the cruise aboard the Yacht Darwin where the captain and crew will welcome you.

PM.: El Chato, The trail that starts in Santa Rosa is surrounded by tall grass and follows the boundaries of some farms. Depending on the season it can be muddy. The rocks are slippery. Be careful. At 1 km of La Caseta there is a pool of water that is filled with tortoises during the rainy seasons. The road to the reserve is one of the best places to observe land birds. Tree and ground finches, vermillion flycatchers and Cattle Egrets inhabit the area and sometimes Galapagos Rails have been seen.

AM.: The islet Las Tintoreras is located south of Puerto Villamil. It has a small bay of completely calm turquoise waters, where you can appreciate sea lions, sea turtles, marine iguanas, rays, etc. The bay is connected to a crevice of crystal clear water, that’s shallow and when the tide is low, the entrance closes. In this crevice, you can see how reef sharks swim along with other small fish and sea lions. Most of the trail is lava AA, except for a white sand beach and a black stone beach. In the first beach there are colonies of sea lions, its also a nesting site for marine iguanas, during the nesting season. The second beach is entirely surrounded by mangroves, button mangrove (Conocarpus erecta) and white mangrove (Laguncularia racemosa). Throughout the trail you can see many marine iguanas in the rocks or under the mangroves.

The visitor site “Wetlands”, is a complex of trails that include the following sites: Cerro Orchilla, a lookout which you can access via a staircase; from this site you can see the bay and the town of Puerto Villamil, Sierra Negra Volcano, the Cerro Azul Volcano, islets and rocks. These sites form spectacular scenery. El Estero is a 227m path of lava rocks, 1.5 meters wide. It consists of a picnic site where the people come to do leisure activities. On this site you can see the four species of mangrove found in Galapagos and a small majagual forest.

It forms part of the stories and legends of the penal colony era on Isabela. La Poza Escondida is a path of stone and wood, where the main attraction is a mangrove forest and at the end of this path is a this pool. Poza Redonda, is a path of 50 meters long, of lava plates leading to a pool formed inside a collapsed lava tube. Tunel del Estero, a path 75m long and with adequate lava plates ending in a staircase inside a lava tunnel. Above the tunnel you can see the intertidal landscape that offers a tapestry of Galapagos Sesuvium between “El Túnel del Estero” and Love Beach. Love Beach, has a rocky sea access, is a site frequently used by the community of Isabela. Los Tunos Viewpoint and Pozas Verde are paths with several lookout points that allow observation of birds and plants. La Playita: Is a path that leads to a small beach that is part of the greater beach in Villamil. The Tortoise Breeding Center of Isabela is located 1.5 km from Puerto Villamil. You can walk or drive. In this Breeding Center populations from South Isabela (Sierra Negra Volcano, Cerro Azul):

Cazuela, Cinco Cerros, Roca Union, San Pedro, Tables and Cerro Paloma have been reproduced in captivity. In total there are 330 between juvenile and adult tortoises. From the population of Cerro Paloma, there are 4 males and two female Galapagos, which, so far, are the only survivors.

AM.: The visitor site is located on the east coast of Rábida Island, consists of a red sand beach, a coastal lagoon behind the beach, and a loop trail. The approximate distance of the trail is 1.1 kilometers. The color of the rocks and sand on the beach is due to the very porous volcanic material, which with the help of environmental factors (rain, salt water and sea breeze, has acted as an oxidizing agent. The main attraction of the place is the red sand beach, scenery, aside from the vegetation of the arid zone and the presence of native and endemic species.

PM.: The visitors site at Dragon Hill is located in northwestern Santa Cruz Island, and consists of a trail that runs through three different environments at just 1,600 m long. It gets its name because in 1975, was one of the only places in the Santa Cruz Island where there were land iguanas (Conolophus subcristatus) in healthy state. In the lagoons at this site, there is shrimp (Artemia salina), the same as is the food of flamingos; at certain times of year they are more abundant and therefore the population of these birds is larger. During rainier times the water of the lagoons become too sweet and therefore shellfish populations decline, and shorebirds also become scarce.

AM.: Sombrero Chino: A small islet located near the south-east coast of Santiago. It’s shaped like a Chinese hat when seen from afar. It is an island consisting of a cone type “Splatter” (lava ejected as drops and falls close to where it came from, which forms a cone inclined) that forms the summit and many lava tubes that go down to the coast. On the west you can see pillow-type lava formations, which are an indicator that the flows were formed under the sea and have been raised upward, which is why coral heads are found on the lava. This visit provides an excellent opportunity for the interpretation of geological features such as lava tubes and lava flows. The trail is 700 m (round trip) and the minimum time it takes this trek is half an hour.

PM.: Black Turtle Cove is a mangrove estuary on the north coast of Santa Cruz Island. Tourists can visit the cave through Panga ride, but with the engines off. Many rays, sea turtles, pelicans and others live in the mangroves.

AM.: Daphne is a volcanic tuff cone, formed by successive explosions produced by the mixture of lava and water. On this island, Dr Peter Grant has made a long-term study of Darwin’s finches, which is why you can see these birds are banded. The palo santo present herein Bursera malacophyla is endemic to the Daphne Islands, North Seymour and Baltra. The blue-footed booby nests inside the craters and the masked booby nests on the flanks of the cone and the edge of the craters and the tropical bird that nests in cavities of the cliffs. Our guide will be checked out at the airport of Baltra. We look forward to a future trip back on our Darwin Yacht

Cruise does not Include